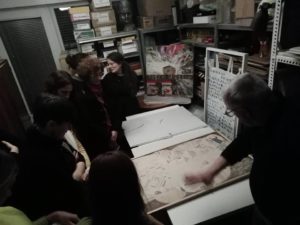 What was distinctive about the turn to New Painting in the Yugoslav art space? How are the potentialities and tensions of the eighties manifest in the oeuvre of Croatian artist Edita Schubert? What was the importance of alternative art venues such as the Gallery of Extended Media, in providing a platform for the characteristically post-modern comingling of high and low registers, the fine arts and underground music, subcultural trends and the visual arts? How can generational and historical divides be bridged, and what can be salvaged from the otherness of the time before the nineties?

For more details about the collective research project Confrontations: Sessions in East European Art History, which is based at the Post-Socialist Art Centre (PACT), Institute of Advanced Studies, University College London, co-directed by Maja and Reuben Fowkes, and supported with a grant from the Getty Foundation, see: http://translocal.org/page1.html

Leonida Kovač, PhD is an art historian, theorist and curator who works as the associate professor at the University of Zagreb – Academy of Fine Arts, where she lectures Art History, Contemporary Art and Contemporary Theories. She also lectures Intermedial Art Practices at the Doctoral Studies in Literature, Performing Arts, Film and Culture at the Faculty of Humanities and Social Sciences. From 1993 to 2008 she worked as curator and chief curator in the Museum of Contemporary Art in Zagreb. She has published the following books: Konteksti (Contexts), 1997; Kodovi identiteta (Codes of Identity), 2001; Edita Schubert, 2001; Relacionirane stvarnosti (Relationalized Realities), 2007; Gorki Žuvela: Izmislite sebe (Gorki Žuvela: Invent Yourself), 2009; Anonimalia:Normativni diskursi i samoreprezentacija umjetnica 20. stoljeća (Anonimalia: Normative Discourses and Self-representation of 20th Century Women Artists), 2010; In the Mirror of the Cultural Screen: Jagoda Kaloper, 2013; Tübingenska kutija: Eseji o vizualnoj kulturi i biopolitici (The Tübingen Box: Essays on Visual Culture and Biopolitics), 2013; Mrđan Bajić: Dis-enacting Transversals, 2017.

Institute for Contemporary Art is a Zagreb based independent cultural organisation running a gallery, reading room and archive. We publish books and artist’s books, hold seminars, research, and work to support the development of visual arts and artists.