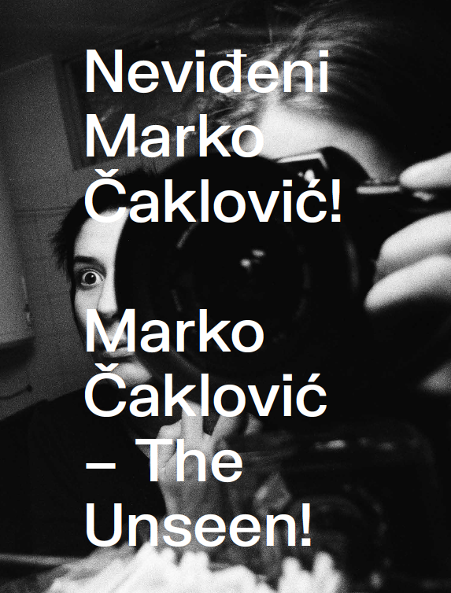 Institute of Contemporary Art, Zagreb
Academy of Dramatic Art of the University of Zagreb

Publication Marko Čaklović – The Unseen! is the first extensive insight into the photographic body of work of Marko Čaklović (1977 – 2006) and also a catalogue of the eponymous exhibition held at the Institute for Contemporary Art, his first posthumous exhibition. By presenting only 80 exhibited photographs, out of a total of 15,000 negatives in the author’s legacy, the exhibition sought to encompass the essential interests and fields of activity of Marko Čaklović, thereby presenting the development of his photographic thought from the initial experiments with framing and angle, all the way to the elaborated concept. All of the works presented at the exhibition are vintage analogue photographs created in the period between 1998 and 2005. These photographs were prepared for exhibiting by Marko himself; by selecting from these works, we also sought to respect his personal choice.

The publication brings two texts by Janka Vukmir and Iva Prosoli, which, based on already known or researched facts, examine Marko’s public activities in the field of photography, his exhibitions and photographs published in magazines, in the context of the cultural scene in the 1990s and 200s, where his entire photographic legacy, created in just ten years, is also an important social document.

Marko Čaklović (October 7, 1977 – June 29, 2006) started working in photography in 1997. The following year, 1998, he enrolled at the Academy of Dramatic Arts in Zagreb, where he was happy to study with prof. Silvestar Kolbas. Although he completed his studies, he never graduated.
In addition to photography, he was involved in video, filming, short video clips, dis-framing of images of film or TV, VJ-ing, video installations and live editing, as accompanying content to sound, space or state of mind.

dr. sc. Iva Prosoli Stojkovska is a museum advisor, head of the Collection of Recent Photography and the Collection of Photo Equipment at the Museum of Arts and Crafts in Zagreb. She is also Assistant Professor at the Academy of Dramatic Art of the University of Zagreb.

Janka Vukmir is an art historian, art critic and
curator. She is a Co-founder and a President of the Institute for
Contemporary Art.