NIKO MIHALJEVIĆ: on Water Smoke the 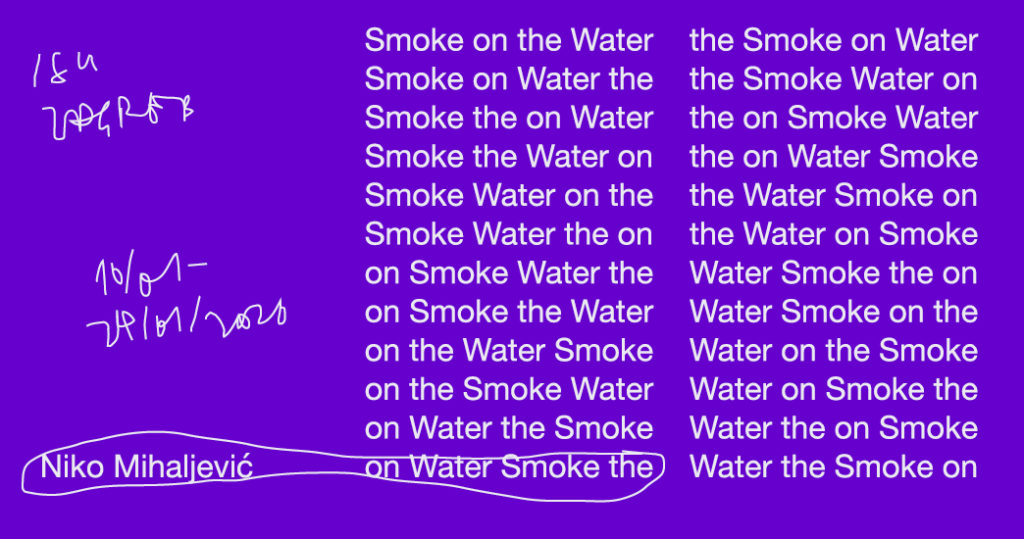 “on Water Smoke the” was composed by the conceptual artist Niko Mihaljević, inspired by the permutation poems of Brion Gysin and the music of Deep Purple. The piece consists of all the possible permutations of the 12 notes in the opening guitar riff from Deep Purple’s “Smoke on the Water”. There are 479 001 600 unique permutations, each lasting for about 8 seconds. The total length of the piece is 130 years and 13 days. The first public performance of the piece will start on January 10 2020. It will end on January 24 2150.

In 1960, Brion Gysin – painter, performer, poet and mystic – produced a series of sound poetry recordings for the BBC radio. These were the so-called “permutation poems”, based around the idea of the cut-up method which Gysin developed with William Burroughs. Within these poems, a single phrase is repeated until its words are rearranged in all the possible linear combinations. The arrangment of text was derived using a random sequence generator written in a computer program by Ian Sommerville.

I AM THAT I AM

AM I THAT I AM

I THAT AM I AM

THAT I AM I AM

AM THAT I I AM

THAT AM I I AM

I AM I THAT AM

AM I I THAT AM

I I AM THAT AM

I I AM THAT AM

AM I I THAT AM

I AM I THAT AM

In 1972, British hard rock band Deep Purple released their album “Machine Head” containing the track “Smoke on the Water”. The song instantly recognizable by its central theme, a guitar riff developed by guitarist Ritchie Blackmore. This twelve tone sequence is probably the most iconic guitar riff in the history of popular music. Also, due to its linearity and simplicity, it is one of the first things beginners learn to play on the electric guitar.

In 2020, after a three year contemplation, conceptual artist Niko Mihaljević realized “on Water Smoke the”, a sound piece which combines Ritchie Blackmore’s guitar riff and Brion Gysin’s permutation method: the 12 tone guitar riff from the original 1972 recording is to be rearranged in all the possible permutations and in every wrong way.

Niko Mihaljević (b. 1985 Split, Croatia) is a conceptual artist and a graphic designer. He graduated at the Werkplaats Typografie (ArtEZ Institute of the Arts) in Arnhem, the Netherlands. In 2016 he received the Radoslav Putar Award (Young Visual Artists Awards) for the best Croatian artist under 35 years of age. His recent projects include founding of the Museum of the Crystal Skull (2019), avant-garde karaoke whistling performance (“Need Your Love So Bad”, 2017) and a performative circumambulation of a small island in the Adriatic (“Circumnavigare necesse est, vivere non est necesse”, 2016).

He is an assistant professor at Media Design department of University North in Croatia, an independent graphic designer and a researcher of vernacular graphic design and typography (recent project: “Wide Selection Of Italian Trousers: A4 Vernacular Graphic Design Of Zagreb”, 2016). He composes esoteric synthesizer recitals as Soft Temple II.

Listen to the composition “on Water Smoke the” on the link here.