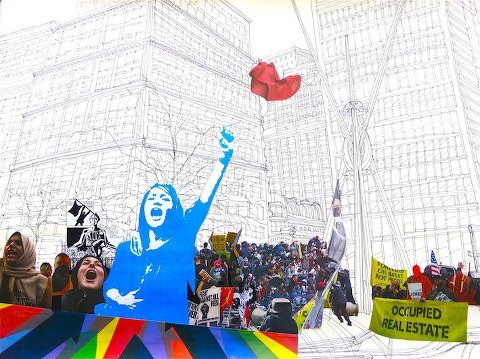 The exhibition American Spring is a solo exhibition of Marko Marković and is a part of Radoslav Putar Award. Like all nine Putar Award Winners before him, so has Marko now the opportunity to exhibit and show how his stay in New York, a residency that is the result of winning the Award, has influenced his later work. American Spring literally describes the time of action, the time in which Marko has arrived in New York, but also alludes to the symbolic of Croatian Spring and the changes that society demands.
At the time Marko arrived in New York, Occupy Wall Street was growing from protest into a continuous movement, and Marko, whose work focuses on social classes, the position of subordinates and superiors, and social and political engagement has found a number of topics and moments that have perfectly incorporated in his work. With this show, Marko Marković will present a series of works created during 2012. in New York.

Marko Marković’s is in his work interested in the transformation process between the individual and the masses; when an individual becomes a mass or when the mass becomes an individual. In doing so, he animates and includes audiences and/or other participants, working with varying age groups and socio-economic classes. Marković’s work is socially engaged and directly involved with people and their needs, consciousness and social structure. He sees this as the best method to directly impact his public audience. Marković’s work reflects current events and questions the structure of politics, economics, status and positions of inferiority and superiority. He uses a variety of media, including drawings, video, installation, performance and happenings.

Marko Markovic (born 1983, Osijek, Croatia) currently lives and works in New York and graduated from the Art Academy in Split, Croatia in 2007. He has participated in exhibitions, workshops and festivals in Croatia, USA, Canada, Russia, Mexico, Finland, Algeria, Bosnia and Herzegovina, Kosovo, Italy, Greece, Serbia and Austria. In 2011, he was awarded the Radoslav Putar Award for the best young visual artist in Croatia by the Institute for Contemporary Art and the Young Visual Artists Awards. Marković also works as the organizer of Days of Open Performance in Split, Zagreb and New York and is the frontman in a performative art-punk band, Elijah and the Grain. He is currently in New York collaborating in Mathew Barney Studio.