DINA RONČEVIĆ, winner of 2013 Radoslav Putar Award, solo exhibition “WHEN THE SYSTEM IS NOT FUNCTIONING, RELATIONS ARE IMPORTANT” 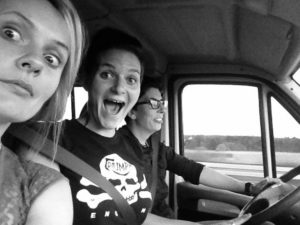 DINA RONČEVIĆ, winner of 2013 Radoslav Putar Award, solo exhibition
“WHEN THE SYSTEM IS NOT FUNCTIONING, RELATIONS ARE IMPORTANT”

Dina Rončević is 2013 Radoslav Putar Award Winner. Part of the award she has won was a residency program in New York for a period of six weeks, after which she set off on further education and professional training at the Sandberg Institute in Amsterdam. During these two consecutive long absence periods from home, she has introduced not only differences in the manner of functioning of different cultural systems, but also the absence of cultural and social mechanisms that until then, living in Croatia she already knew. Simply put: “The work I do is mostly about gender identity, but as I was not there in the homeland, I had rarely drank brandy, and other forms of identity began to interest me.”

Dina has already had been known and recognized among local cultural public for her interest in the social and women’s studies, and her re-training in a car mechanic, which she graduated with at the Department of Animation and New Media at Art Academy in Zagreb.
From her earliest works she valued the same the components of executing the work, the work-process in the preparation and construction, as well as the interweaving of professional work with everyday life. This lead her to one of the main features of her working methods – group work.

“Working with individuals who are otherwise engaged in other disciplines, in addition to enriching the content of new knowledge, enables me through work execution or cooperation, to directly try out methods of establishing relations … ..” she said when competing  for Radoslav Putar Award.

The exhibition WHEN THE SYSTEM IS NOT FUNCTIONING, RELATIONS ARE IMPORTANT, will expose two of her works.

One, after which the exhibition is titled consists of audio work in which the artist takes the audience through the narrative of personal stories related to socializing around brandy culture, bringing some conclusions about her own identity and creating a community around plum brandy; one spatial installation, and processes in which the artist assist her friend Ivana Furač in the process of making brandy, which is presented to the public in the gallery, three days before the opening of the exhibition. The brandy baked in this process will be bottled and sealed, and offered to audience at the opening as multiples of her art work that interested audience will be able to purchase in the gallery.

HOT, HOT BURNING WATER, another work at the show, consists of a trike vehicle and video documentation showing that vehicle production, with the participation of a group of friends and associates who under the pretext of learning mechanics, inform a small working community without the burden of producing a perfect product. Because of the possibility of error, expressed a willingness to work accompanies a relaxed and creative atmosphere in which workshop participants learn something about the two-stroke engine, type of pipes, which resulted in a fatal infatuation with welder and grinder. A vehicle “Milica” is trike vehicle with a chainsaw drive.

Dina Rončević (1984) is a multimedia artist from Zagreb.
She graduated from the Academy of Fine Arts at the Department of Animation and New Media (2010), completed retraining for car mechanic (2009) and a course at the Center for Women’s Studies (2009)
She has exhibited in numerous exhibitions and festivals and has won Radoslav Putar Award (2013)
She has participated in art residencies in Mexico (Cantor, 2012) and New York (ISCP, 2013); won a scholarship grant from Frankopan Foundation, and is currently completing her MA program at the School of Missing Studies in Art and Learning department Sandberg Institute at the Rietveld Academy in Amsterdam.