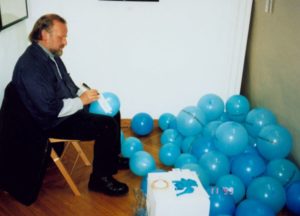 Accompanying programs:
– May 20, 2:00 p.m. presentation of the exhibition at APURI, Rijeka, within the frames of the of the art of the 90ies research, Rijeka 2020
– discussion with Jelena Perić;
– projection of digitized documentation of the Institute of Contemporary Art with selection of works in public urban areas of the 90’s.
The dates will be announced soon.

Anto Jerković is known as the artist who was primarily dedicated to painting. His first art action in the public space was the painting action that took place in the Zagreb neighbourhood of Prečko in 1986 and was the result of a simple lack of work space. By the end of his career and untimely death, he completed about twenty more actions in public spaces in Zagreb, Croatia and internationally. One of his unrealized actions is also presented at the exhibition.
All material selected for the exhibition was created and produced during the artist’s life, consisting of photographs, video and audio footage, sketches and texts, accompanied by media reports on selected projects.

At the exhibition, the CD Anto Jerković 1958 – 2005 will be available at the promotional price, produced by the Institute for Contemporary Art, editors: Janka Vukmir and Jelena Perić.