MILJENKO HORVAT, I Have A Very Great Handicap: I Have No Theory, solo exhibition 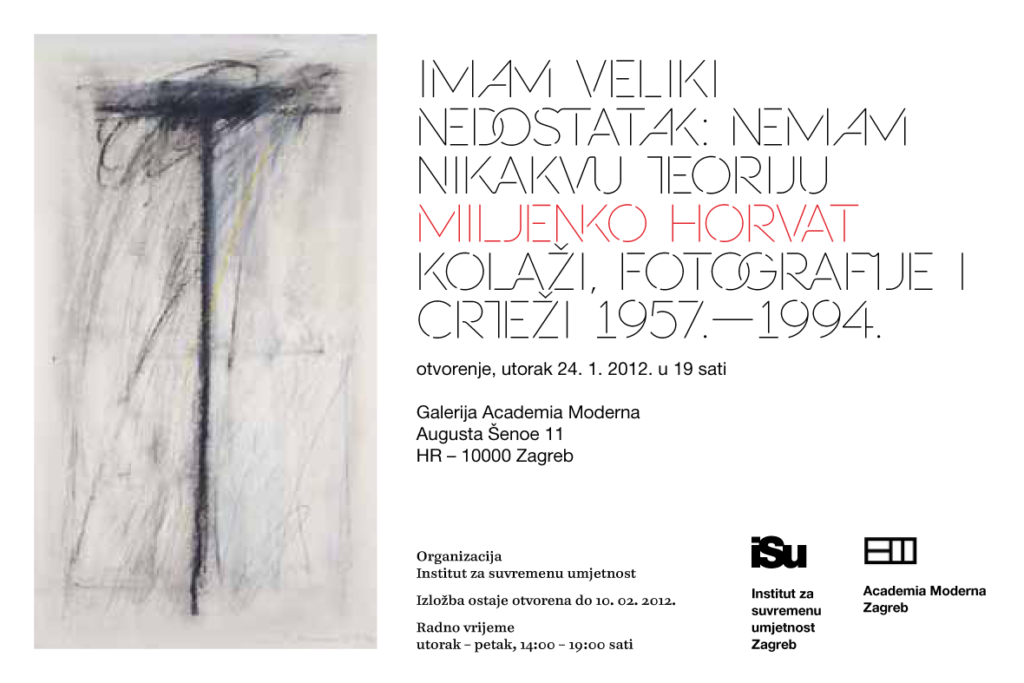 MILJENKO HORVAT
I Have A Very Great Handicap: I Have No Theory
Collages, photographs and drawings 1957 – 1994

The exhibition Miljenko Horvat, I have a very great handicap: I have no theory, collages, photographs and drawings of the 1957 – 1994 will open on Tuesday, January 24, 2012 at the Gallery Academia Moderna, curated by Janka Vukmir and organised by the Institute for Contemporary Art.
Miljenko Horvat (Varaždin, 1935.), architect, painter, graphic artist, photographer, writer and poet, illustrator, and art collector, entered the art world in the mid 1950s as the youngest member of the famous group Gorgona in Zagreb. During his entire life, he has worked as an architect, lecturer and designer in Paris, France and Montreal, Canada. He left Zagreb in 1962, and returned a few years after his retirement in 2008, where he now resides. During 1965 was the last time he had a solo show in Zagreb. In the same year, as a member of the group Gorgona, he was the author of anti-magazine Gorgona’s 7th issue. In 1975, he exhibited in the New Tendencies 5 exhibition, when he was working with computer graphics. Horvat was also the co-editor and co-publisher of collections of “1 +1” and the first publication on computer graphics, “Art Ex Machina”, 1972. He has exhibited in more than 150 exhibitions in Europe, North and South America, and Asia.
His work is in numerous public, corporate and museum collections including: Museum of Modern Art, New York, Museum of Fine Arts, Montreal, Musee d’Art Contemporain, Montreal, Musee du Quebec, Quebec, Stedelijk Museum, Amsterdam, Museum of Modern Art, Haifa, Israel; Museum of Contemporary Art, Zagreb, Museum of Modern and Contemporary Art, Rijeka, Macura Museum, Belgrade, Department of External Affairs, Ottawa, Carleton University, Ottawa, Universite de Sherbrooke, McGill University, Montreal, Canada Teleglobe; Air Canada; and private collections Coppenrath & Ass. Montreal, Marinko Sudac, Zagreb, etc.
Horvat shared the art anti-attitudes with the Gorgona group from its conception untill the end in 1966, and continued his art practice within the same spirit from the 1950s, 1960s and throughout his whole career. After he left Zagreb for Paris, he primarily made collages, drawings, and high contrast images. In the 1970s, after he left to Canada, he concentrated on computer art as an author and publisher, while he also began his most productive period of drawings, photographs, exhibitions.

The exhibition presents a selection of collages from Horvat’s last solo exhibition in 1965 in Zagreb. A total of 32 of his works are shown, including photographs, now in the possession of the Canada Art Bank; a selection of drawings from 1957 – 1994; and Juliette, a book of drawings.