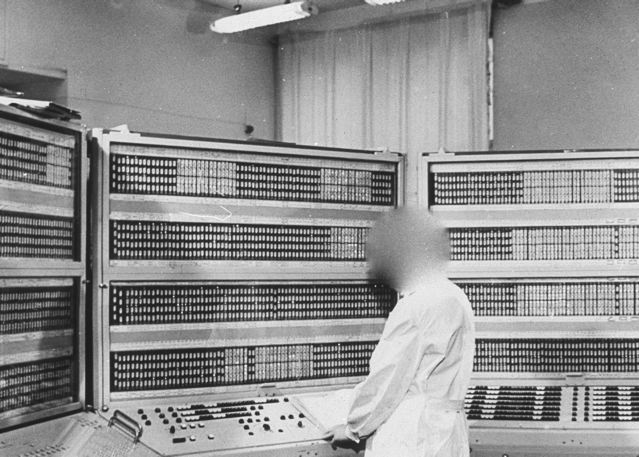 18:30 – LIVE: Robert speaks about history, memory, photography, and his work in Germany, Ireland and China

The exhibition remains open until November 9, 2013.

This is the first Robert O’Connors exhibition in Zagreb. He has exhibited in Croatia at 37th Split salon in 2011.

Robert O’Connor says how Control is an opus of works that explores images, photos and historical images, such as documentary photography of the postwar period in the GDR.
“Control is a body of work that focuses on pictures and historical images, such as documentary photos from the post-war period in the GDR. The ever-expanding sea of images that exists in the public domain and on the Internet has influenced this change in my approach to the given material. A box of 35mm slides purchased at a flea market in Berlin became the fuse for a new project in 2009. Titled Lenin’s Ideen wurden Wirklichkeit (Lenin’s ideas became reality), the slides document a number of projects completed by national workers and observed by their communist representatives against carefully staged backdrops and settings. The photographs selected, which have been appropriated, focus on political representations, industrial architecture and propaganda from the German Democratic Republic (GDR) 1949 –1990.”

In the text of Barbara Vujanović accompanying the exhibition, you can read how “The cycle of digital photographs by Robert O’Connor entitled Control inevitably brings to my mind the same issues about the (re) shaping of the past and our memories, of adopting different viewpoints, depending on the space-time coordinates. Artists do just this – they reshape. O’Connor selects bits of the past that are frozen on old slides and remodels them. Documentary photos, in which, from ideological reasons, the heroic exploits of the working class are registered, of course under the vigilant eye of its communist political masters, are a point of departure for a return to the post-war period in the GDR. This period was, in the DDR or GDR, as it was in the Socialist Federal Republic of Yugoslavia and in the USSR and in other communist countries, characterised by strict regime control.”