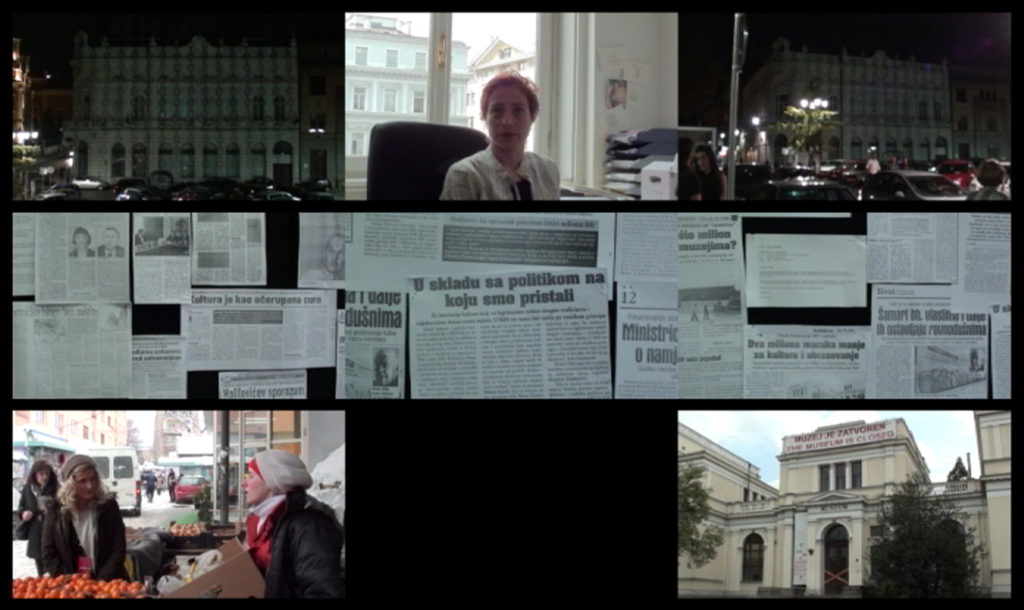 This three-channel video installation called Lost Identities deals with the issue of culturicide in Bosnia and Herzegovina. The authors of the video talk from their own experience about illness within Bosnian-Herzegovinian society, in which culture and cultural identity are generally marginalized, as well as visual art. The current state in which culture is situated is a result of the long-term politics, directed against everything with a prefix of Bosnian-Herzegovinian, and has a tendency to create ethno-denominational social order. Historically, the aim is to try to prevent a continuous affirmation of multiculturality and cultural collectivity in Bosnian-Herzegovinian society, and to impede a promotion of cultural qualities of these local nations, which should connect rather than separate the people.

Local museums and galleries, especially in Sarajevo, show the real problems and the hard life of Dayton’s Bosnia and Herzegovina: they have been closed because official authorities still have not found a permanent solution for their legal status. Many appeals and desperate calls for help, made by workers in cultural institutions, were addressed to the responsible politicians, who only offered one-time financial assistance but otherwise empty promises. Forced by bureaucratic negligence and determined to cut this endless agony, the cultural workers decided to close the doors of their institutions to the public. The National Gallery of Bosnia and Herzegovina was the first to close its doors to the public in 2011. It led to the closing of the most important cultural institution in Bosnia and Herzegovina – the National Museum, in 2012.

“The National Gallery is like a container – a memory collector that paints our identity and multiculturalism. The primary goal of the container is to keep, cherish and educate newer, younger generations who must be aware of a priceless value of a such container. It collects the art works of legendary figures who built our society, cultural identity and art history.” The artist Nela Hasanbegović used an art intervention in a public space called Closed to the Public as a reaction against the current situation of The National Gallery. She projected chains on to the facade of the gallery in order to provoke public conversation about this issue, instead of participating in the destruction of multiculturality by being silent. After the first artistic reaction, the second intervention took place – an audio installation called It is time for alert, by Daniel Premec. The artist “responded to the general situation in the country, its reflection on culture, nationally significant cultural institutions, and the loss of a cultural identity. The sound of sirens were played for 30 minutes on to the facade of The National Gallery of Bosnia and Herzegovina, the artists’s attempt to show the alarming situation.” The artist inflames and provokes the public to be aware of a potential collapse of Bosnian-Herzegovinian society with consequences laying on future generations.
Nela Hasanbegović and Daniel Premec are the instigators of a happening that took a place at the food market in Grbavica, in February 2012, where with a group of international artists they offered a cup of tea in exchange for dialogue with the local market vendors. The three-channel video installation includes interviews, answers about the problems within cultural institutions and cultural politics, but also spontanious discussions about existentional issues in the lives of the interlocutors, social status, and also problems within the educational system. The market as a meeting point, is fitting for its centuries old tradition of open politics, and open opinions.
The complex political situation, a lack of official support to talented art personell, inadequate strategy to empower cultural industry and unacceptable attitudes towards cultural-historical heritage in Bosnia and Herzegovina, has ensured the continuation of difficulties into 2013. This art work is also a message to neighboring states, sharing the same or similar situation of the closure of their cultural and historical institutions.

For the realisation of this video installation, the following has been used: art interventions/reactions, the statements of curators in National Gallery of Bosnia and Herzegovina, newspaper articles about local cultural situation, happening at the market in Grbavica.
Visual materials are from 2011, 2012, and 2013.