ILIJA ŠOŠKIĆ: „We are All in Danger“, exhibition 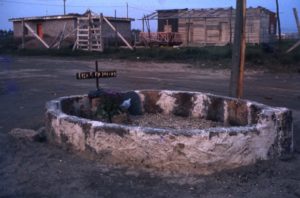 | The first solo exhibition of Ilija Šoškić since 1989 in Croatia opens at the Institute for Contemporary Art. In the meantime, he exhibited in Split at the group exhibition of the AAA collective and held a lecture at the Fine Arts Academy in Zagreb in 2017. He exhibited the last time in Zagreb in 1986 at the SC Gallery.

The exhibition “We are All in Danger” consists of a photo-narrative “PPP. Nine hours later” recorded at the scene of the murder of Pier Paolo Pasolini, nine hours after his killing on November 2, 1975, of documentation and artist’s spatial intervention that will be performed live on the occasion of the opening of the exhibition on the tar paper.

| „(…) A tragedy has occurred at one of the corners of the pitch, marked by a circle made of stones and bricks (found nearby) and a bit of chalk; there was a “mausoleum”, with a cross made of two pieces of wood found in the rubbish, inscribed with the letters saying “Pier P. Pasolini”. It was a set of martyrdom, of an artist. It reminded me of the murder of Archimedes and the cynicism of an imperfect civilisation.” Šoškić writes by this work.

After the recently, at the end of 2018, held the great retrospective exhibition Aktion Forms, simultaneously set up in the MOCAB in Belgrade and the MOCAV in Novi Sad, Šoškić’s body of work was canonized within the fields of action and shape, and the range of his actions was labelled by a triangle delimited by art, philosophy and mathematics, and I might proceed into sub-segmentation and say that Šoškić throughout his career acts between politics, nature and his artistic appearance as living images (tableau vivant), or moves between activism, shamanism and symbolism, but also between action, forms and various kinds of personal presence in his works. (J. Vukmir, from the introductory text)

| Ilija Šoškić (Dečani, 1935.) is a member of the first generation of Yugoslav artists who worked in the spirit of the new artistic practices. Before entering art he was an athlete and was the state champion and representative of SFRY in the hammer throw. He attended the art school in Herceg Novi, the Academy of Fine Arts in Belgrade and the Accademia di belle arti in Bologna. From 1969 until 1972 he lived in Bologna and from 1972 in Rome. He gained world attention through his cooperation with the legendary Gallery L’Attico in Rome where he exhibited together with Jannis Kounellis, Luigi Ontani, Michelangelo Pistoletto and others. Famous critics such as Emilio Villa, Achille Bonito Oliva, Mario Diacono have written about him. He exhibited at the most important international and Yugoslav art manifestations (Venice Biennial, Trigon, the Yugoslav Documents, April Meetings, etc.) He has lectured at the most eminent European art academies (Düsseldorf, Rome, etc.). llija Šoškić’s artistic practice spans more than five decades and his work encompasses performance, tableau vivant, the art of behaviour, guerilla art, cultural and political mythology, mathematics and the metaphysics of nature. (From the catalogue Action Forms, 2018)