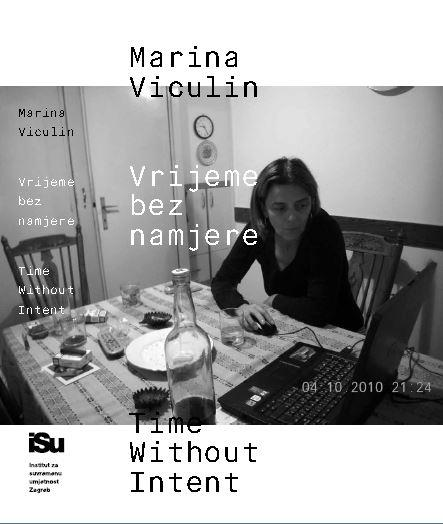 MARINA VICULIN: „TIME WITHOUT INTENT“
The book will be presented by Igor Kuduz and Janka Vukmir

The book MARINA VICULIN: TIME WITHOUT INTENT brings around 70 texts written by art historian, curator and former director of the gallery Klovićevi Dvori, Marina Viculin which she wrote during eleven years, between 2004 and 2014, until her untimely death at the early 2015.

The texts in the book are divided into two chapters, each of which represents one of the multiannual exhibitions cycles initiated, conducted and organized by Marina Viculin,   Snapshot/Brzo okidanje 2004—2014, at her parent institution, Klovićevi Dvori Gallery in Zagreb and the series exhibitions at the Waldinger Gallery 2007—2014, in Osijek.

The book is fully bilingual and thus accessible to international audiences.

More about the book

Readers are introduced into the book, the reasons for its creation, the context and summary of Marina’s work, by co-editors Igor Kuduz and Janka Vukmir, and is concluded by an editor’s note, a chronology of the complete exhibition cycles and index of the artists names.

|  Marina Viculin (1957 – 2015) was an art historian whose rich professional career covered various areas of art, but she predominantly worked with living artists and in the field of contemporary art. She could, however, easily switch between different historical periods and various professional topics. She was active at various institutional levels, and she held expert and management positions. From 1989, until when she had been working as an independent art critic and curator, she worked as a curator at the Museum Space (Muzejski prostor), later renamed the Museum and Gallery Centre (Muzejsko galerijski centar) and finally the Klovićevi Dvori Gallery (Galerija Klovićevi dvori) where she became a museum adviser and acted as the director from 2012 until her premature death in 2015. As a PhD, she also worked in the academic sector.