RADOSLAV PUTAR AWARD exhibition FINALE 2022! and the announcement of the Winner

Institute for Contemporary Art, Zagreb
and HULU – Split
have the honour to invite you to
The 21st exhibition of Finalists and Radoslav Putar Award Ceremony

(read more about the finalists at the bottom of the page) 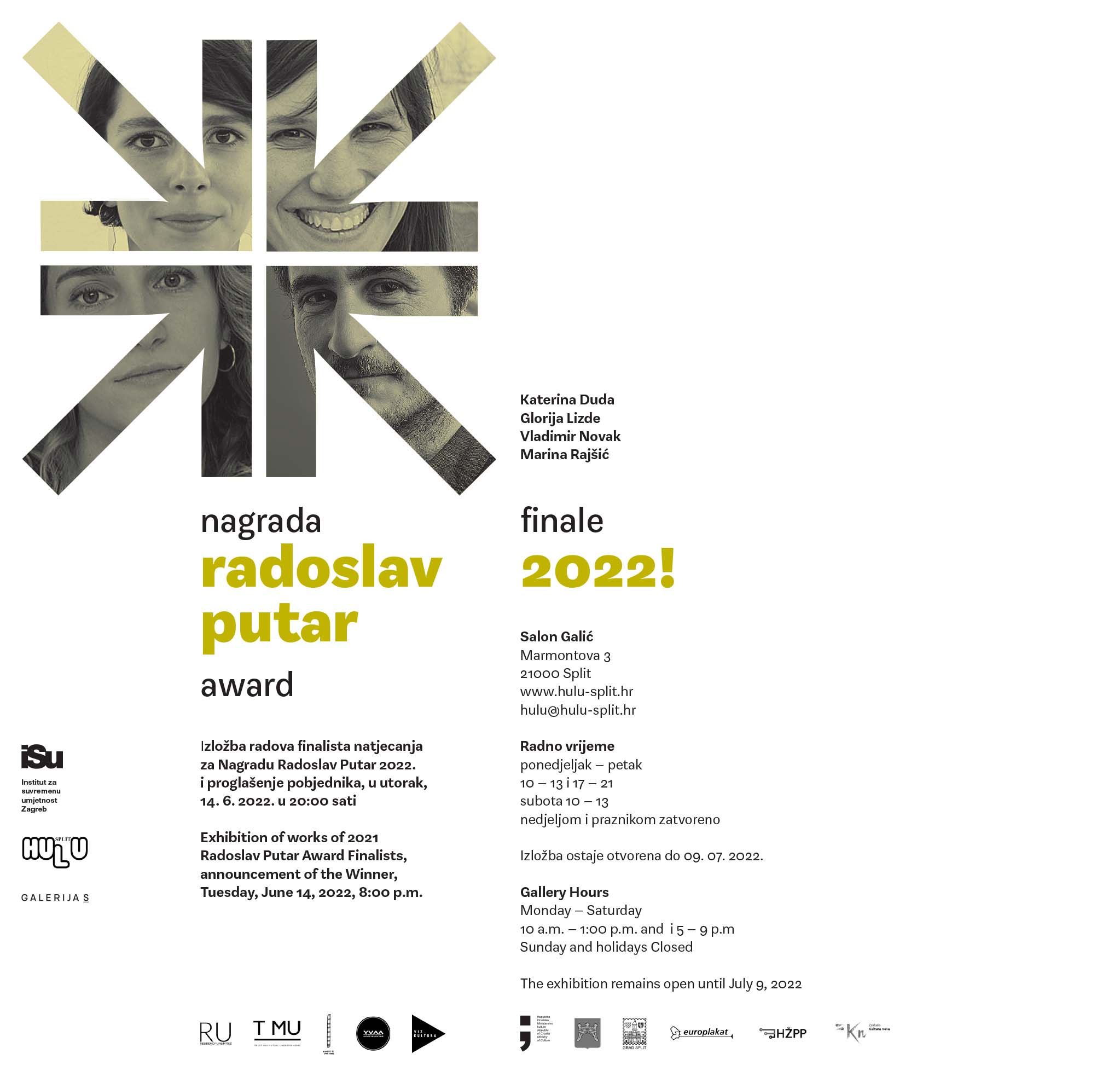 The exhibition remains open until July 9, 2022

This award has been given since 2002, when it was established by the Institute of Contemporary Art as part of the international network YVAA – Young Visual Artists Awards, which by now consists of organizers of similar awards 12 European countries.

The initiative to call it the Radoslav Putar Award reflects the desire of the Institute of Contemporary Art to promote clear attitudes, active participation and high professional standards, as tools for affirming democratic processes interdependent with the development of culture, cultural institutions and arts in Croatia.

Radoslav Putar (Varaždin, July 20, 1921 – Zagreb, July 18, 1994), a famous art historian and art critic, significantly directed the Croatian cultural scene towards the contemporary art language. His work is also important from a social point of view because he promoted the ideas of democracy and advocated dialogue, tolerance, freedom of expression and openness to other cultures. Today, it is difficult to imagine the extent to which his work was heroic, and we can confidently say that his contribution to theory and practice is a key segment of contemporary Croatian art and culture.

The Radoslav Putar Award consists of a two-month stay at the Residency Unlimited in New York; http://residencyunlimited.org/, in the term in agreement with RU; solo exhibition at the Institute for Contemporary Art in Zagreb during 2023; multi-original production in collaboration with Gallery S from Koprivnica, and a place in the jury of the Radoslav Putar Award 2023.

This year’s jury is composed of:

So far, more than 600 artists and have participated in the Radoslav Putar Award competitions, and 86 artists and 89 jury members in the finals.

Katerina Duda (1989) mastered in Animated film and New media at the Academy of Fine Arts and Sociology at the Faculty of Humanities and Social Sciences in Zagreb. In her works she starts from concrete spaces, exploring how space and certain microlocations reflect wider social changes. SHe works on the themes of tourism and architecture, with an emphasis on art in context. He thus uses a variety of media such as social practice, actions and interventions in public space, as well as documentaries and videos. She has exhibited in a number of solo (Gallery 90-60-90 Pogon Jedinstvo, GMK, Gallery Forum, VN Gallery, Art Workshop Lazareti) and group exhibitions in the country and abroad (021 Ostrale Biennale, Mediterranea 18, etc.). She is the author of the award-winning short documentaries Currents (2019, Restart) and The Cutting (2015 Restart ŠDF).

Glorija Lizde (b. 1991, Split, Croatia) researches in her photographic work the themes of family relationships, genetics and memory by bringing together documentary and staged photography. She graduated with a Bachelor’s degree in Film and Video at the Academy of Arts in Split, Croatia and her master’s degree in Photography at the Academy of Dramatic Art in Zagreb, Croatia. Her work has been shown in both group and solo exhibitions. For her work on photography series F20.5 she was awarded ADU Dean’s award in 2018. Her works Bodyscape and F20.5 were acquisited for the Erste fragmenti collection. She was nominated for the World Press Photo Joop Swart Masterclass (2020) and participated in the international program for new artists Parallel – European Photo Based Platform (2018 and 2021).

Vladimir Novak (1987.) graduated in sculpture in 2017 at the Academy of Fine Arts in Zagreb. For his work he was awarded with Sculpture symposium Lokve award at XIII. Triennale of Croatian Sculpture in 2018, HPB Grand Prix at the 34th Youth Salon – Panoptikon in 2018, and Rector’s Award at the University of Zagreb for independent project in 2015. He has performed eleven solo and numerous group exhibitions in Croatia and abroad and has been a resident at Cité Internationale des Arts in Paris. Since 2019 he works as a freelance artist as member of Croatian association of artists and Croatian freelance artists’ association. Lives and works in Zagreb.

Marina Rajšić (1995, Rijeka) graduated in visual communications and graphic design at the Academy of Applied Arts in Rijeka in 2019. In December 2018, he publishes an art book called The Art of the Beautiful. She has been exhibiting since 2015 and has received several recognitions and awards for her work. She deals with the topics of the relationship between the individual and the population, their adaptation to the environment, questioning herself as an individual of the population of the 21st century. She is interested in contemporary social norms and social context, fiction and speculation, the relationship between virtual and physical space, comparisons of the relationship between past and present, artificial and natural, science and trends, active and passive. Recently, she has included elements of marketing in her works, as a tool for reaching a wider, unconscious and often “non-gallery” audience.