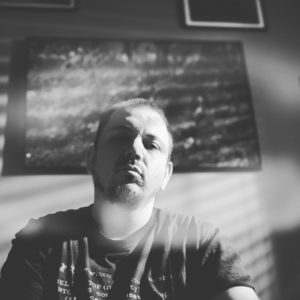 Bojan Koštić, 1988; Koprivnica – He received his master’s degree in Croatology and completed his undergraduate study in Latin language and literature. During his studies, he engaged in journalism and literary criticism. He is the founder and general secretary of the Pod galgama Association as part of which he staged the author’s play “Krleža’s Love Quiz”. He is the co-author of the book “Krležin eu/ropski furiosum” published by the Pod galgama association. He is an active member of the Mamuze association, and the founder and coordinator of the FUNK Association of Independent Culture Association Forum, and works as a curator and technician at the AK Gallery. Deals with photography, video and performance. He has been exhibiting since 2016.

conceptual approach to the work. Since I don’t have a formal art education, I am not

consistent in using one, specific medium, but the very idea I want to express selects the most suitable medium for itself. Although I have not received an art education at any academy, since 2013. I have been working on art exhibitions at the AK Gallery, which exhibits exclusively contemporary artists and through over 70 exhibitions I have met many authors, each of whom has contributed to my education and understanding of contemporary art.

My primary interests while studying were language, literature and theater, and from this source I developed what I can call my own artistic preoccupations: testing the boundaries of language in the sense of what Gilles Deleuze calls “tremor of language” in his essay ” He stuttered. ” In addition to that, an important personal determinant of my work is my speech defect, that is, my stuttering as a mechanical consequence of childhood traumas. Therefore, I would call my artistic work, in Deleuzian sense, a stutter of language, in both literal and symbolic terms.

Almost every work of mine originates in a language – from a word, syntagm, sentence, text or book – whatever comes from that point in the form of an artistic idea seeks to extend the primary meaning of that linguistic structure, that is, to stretch the boundaries of the semantic field within which the idea itself originated.