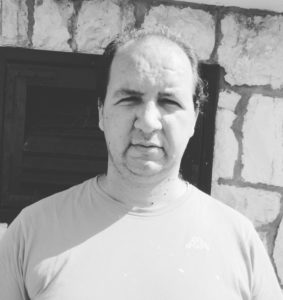 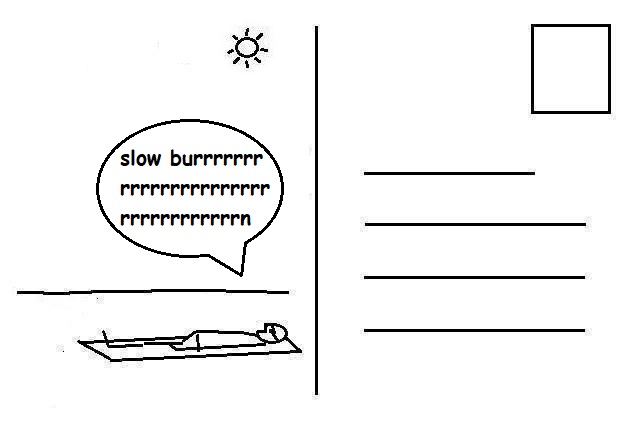 The man lying on the beach asks Rodin’s Thinker: Obsessing much? The Thinker: No, why do you ask?

This is one of 226 postcards exhibited at the exhibition Finale 2020! of the Radoslav Putar Award. Work is titled Tiring Vacation[1]. It speaks of the position of the artist. The social perception is that artists really don’t work and that they are on some kind of lifelong vacation, especially conceptual artists.

I live in Hvar and Hvar is extremely tourism-oriented. Every normal being is in this or that way in the tourism business. My position is reversed, instead of renting apartments, freed of that duty, I am closer to tourists. I am writing the postcards and posting them on Facebook already for the 4th year in a row. They are some kind of zen postcards. They have no face, their face is empty, or their face is not a face – they are reversed. I create them in the Paint program mainly because of practical reasons and they have “a digital look”. The work refers to digital, virtual or the revolution of the social media. There is always one character repeating in the drawings, he just lies there, talking mostly to himself. There are lots of autobiographical elements in him and, you can say that he is an idealised version of me. A good way to read the work is with an empty mind. There is nothing to understand and the work doesn’t have any hidden meaning – all there is – is on the surface. The element of humour is there like door the “higher consciousness”, with humour everything becomes easier and humour can’t be learned. One of the postcards says „Ideas usually come to me when I stop thinking.” So, what is demanded from me as the author and the observer of the work is – not to think.

I have decided to accept donations in the gallery. At first, I intended to sell the postcards, but because of the procedure complexity, I opted for donations. The stand with the postcards is on the display in the gallery window and the idea is that it becomes invisible, as one of many window-displays in the street. With Tiring Vacation, I work for real – accepting donations – and it is one of the rare opportunities to earn with my own work. If nothing else, at least that.

[1] The literal translation from Croatian would be the Annual fatigue, which is the opposite of the annual rest denoting the annual leave, a syntagma used for vacation.