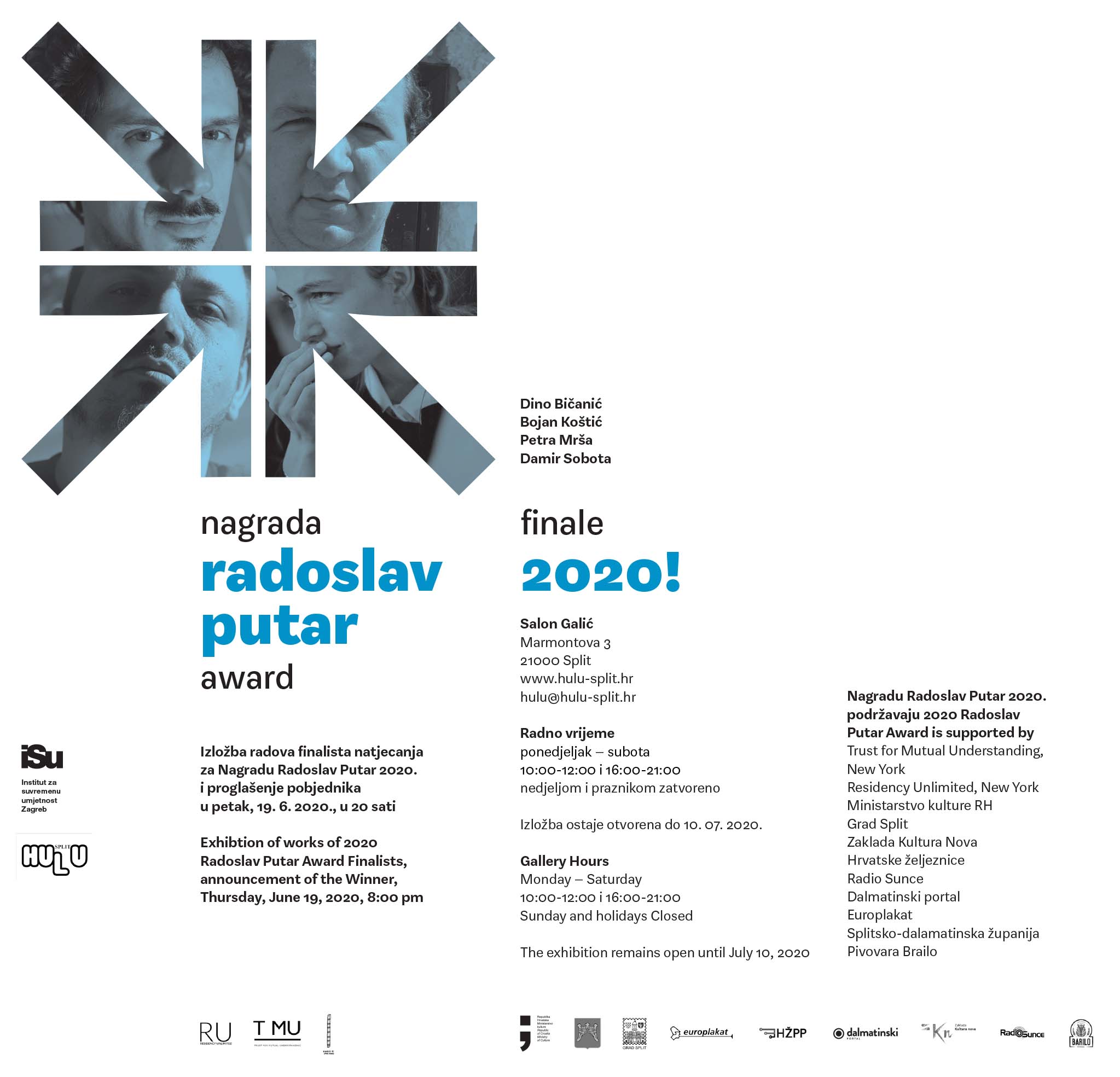 have the honour to invite you

to the opening of the exhibition of works of the Finalists of
RADOSLAV PUTAR AWARD
FINALE 2020!
and the announcement of the 2020 Radoslav Putar Award Winner

at the SALON GALIĆ, Marmontova 3, SPLIT

HŽ, Croatian railways are offering visitors to the exhibitions of the HULU – Split 40% discount on travels

FINALISTS of the RADOSLAV PUTAR AWARD 2020 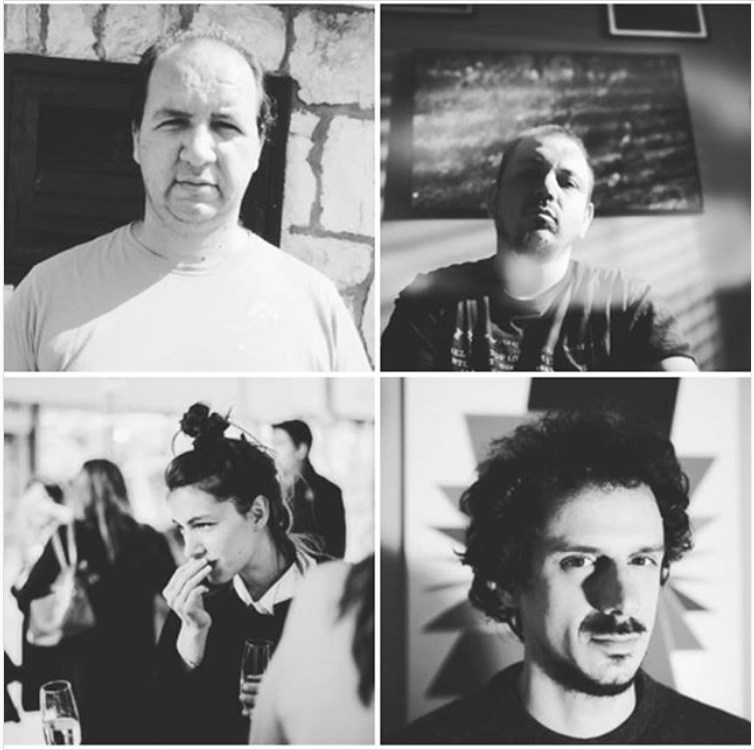 Bojan Koštić received his master’s degree in Croatology and completed his undergraduate study in Latin language and literature. During his studies, he engaged in journalism and literary criticism. He is the founder and general secretary of the Pod galgama Association as part of which he staged the author’s play “Krleža’s Love Quiz”. He is the co-author of the book “Krležin eu/ropski furiosum” published by the Pod galgama association. He is an active member of the Mamuze association, and the founder and coordinator of the FUNK Association of Independent Culture Association Forum and works as a curator and technician at the AK Gallery. Deals with photography, video and performance. He has been exhibiting since 2016.
read more…

Petra Mrša, graduated Photography at the Academy of Dramatic Arts, Sociology at the Faculty of Humanities and Social Sciences, and Psy­chology at the University Department of Croatian Studies at the University of Zagreb. Her artworks are included in the collections of the Museum of Arts and Crafts in Zagreb, Rigo Galery and the City Museum of Zagreb, and were exhibited at numerous solo and group shows. She has published artist books New School (Pazzini Editore) and Rehearsing family (Museum of Modern and Contemporary Art, Rijeka). She worked as an assistant at the Hoxton Gallery in London and for the last four years has been employed as an assistant at the Department for photography at the Academy of Applied Arts in Rijeka. She was taking a part in the postgraduate international art program WHW Akademija run by curatorial collective What, How & for Whom/WHW in Zagreb. The prima­ry field of her artistic work lies in researching the way how acquired constructs shape the lives of individuals.
read more…

Damir Sobota graduated from the Academy of Fine Arts in Zagreb, Graphic Arts, 2013. He has participated in several solo and group exhibitions, including the 31st Youth Salon 2012 and the 2nd and 3rd Biennial of Painting 2013 and 2015, HT Award @ MSU 2011. Has attended residency programs in Belgium and Germany during 2015, 2018, and 2019.
He worked as an associate professor at the Department of Fine Arts and Graphic Design at the Faculty of Graphic Arts in Zagreb. He participated in the Scientific and Professional Meeting Aestheticization and Rehumanization of Public Space, Art as Therapy, Painting KBC Rebro, Zagreb, 2017. He is a recipient of the Young Artist Award for 2017. He is a member of the HDLU and HZSU. He lives and works in Zagreb.
read more…

+  Nagrada Radoslav Putar was established in 2002., and will this year be awarded for the 19th time.

THE RADOSLAV PUTAR AWARD WINNER
will have the opportunity to enjoy two months residency at the Residency Unlimited in New York, http://residencyunlimited.org; will get a chance to produce of one multioriginal work at the Gallery S, Koprivnica, https://galerija-s.com;  will have the solo exhibition at the Institute for Contemporary Art in Zagreb, and will have a seat at the Jury of Radoslav Putar Award in 2021.
+
The award is organised in collaboration with the YVAA – Young Visual Artists Award network, Residency Unlimited, New York and the Trust for Mutual Understanding, New York, and was initiated by Wendy Luers with The Foundation for a Development of a Civil Society.
+
In 1990 Wendy W. Luers, founder and director of Foundation for a Civil Society, together with President Vaclav Havel and a group of dissident artists first established the Jindrich Chalupecky Award in Czechoslovakia to recognize artistic excellence in young visual artists, under 35 years old, and provide them with a U.S. residency experience.
+
The Young Visual Artists Awards program was established over several years as an international network of similar awards with support from the Trust from Mutual Understanding, a US foundation. Today 10 European countries are part of this network: Czech Republic, Slovakia, Croatia, Kosovo, Serbia, Macedonia, Bosnia and Herzegovina, Slovenia, Albania and Bulgaria. In 2015, Residency Unlimited (RU) was engaged as the organizer of the YVAA program and host of the NY residency program.

RADOSLAV PUTAR AWARD: Award for the best visual artists of Croatia up to 40 years of age.  Established in 2002, awarded for 19th time.

AWARD:
Two months residency at the Residency Unlimited, New York, http://residencyunlimited.org
Production of one multioriginal work by Galerija S, Koprivnica, https://galerija-s.com
Solo exhibition at the  Institute for Contemporary Art in Zagreb
and a seat on the Jury of the Radoslav Putar Award 2021.